Welcome to the Year 2 Class Page!

On Wednesday, all children had a great afternoon participating in our school Sports Day! They enjoyed events such as long jump, javelin and the egg and spoon race. Well done, everyone!

Today, the children enjoyed celebrating the Queen’s Platinum Jubilee! They loved reading our special book which has lots of interesting facts about the Queen. They also participated in a competition where each child designed their own crown - winners will be chosen next week :)

This week, children in Year 2 received an email about a mysterious missing cake! They were asked to help discover who stole the cake from the staff room. They used the iPads to draft an email response accepting the request.

This week, children in Year 2 were introduced to ‘Quest’ by Aaron Becker. As this is a picture book with no words, the children had to use their imagination to tell the story themselves. Here are some examples of the writing that the children produced. 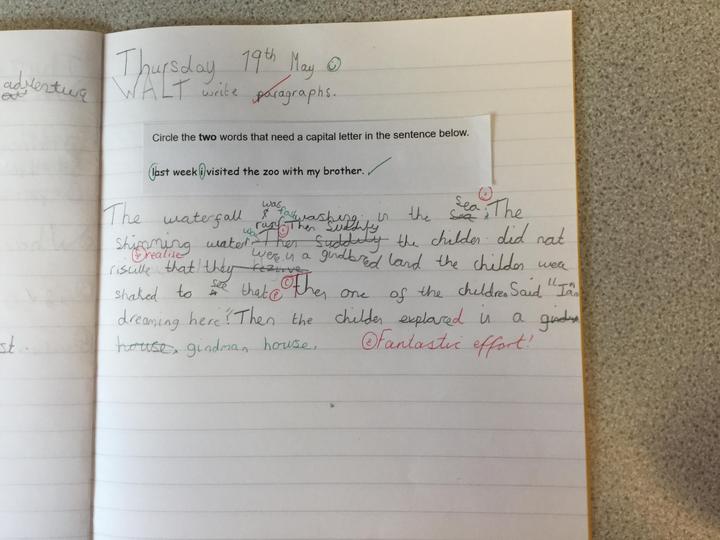 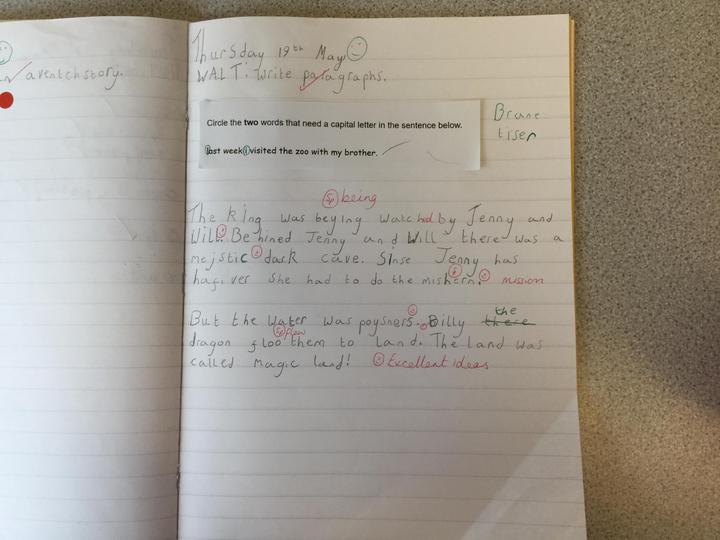 This week, children in Year 2 enjoyed completing obstacle courses in PE. They had to run, jump, weave, burpee and crawl to the end! 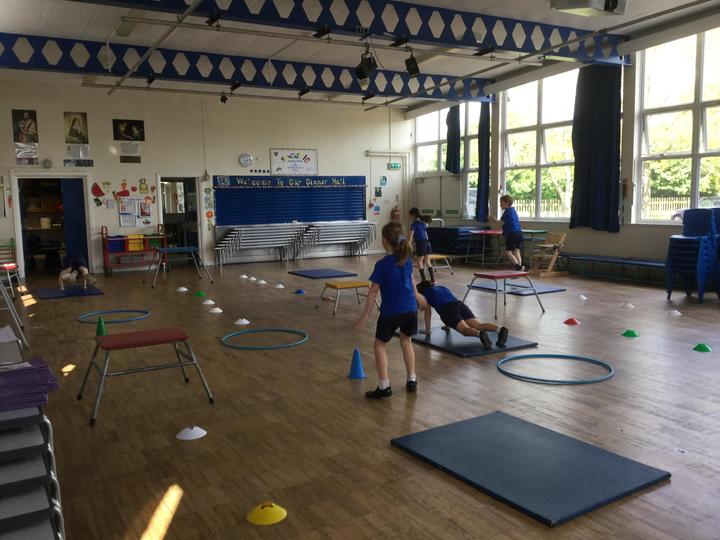 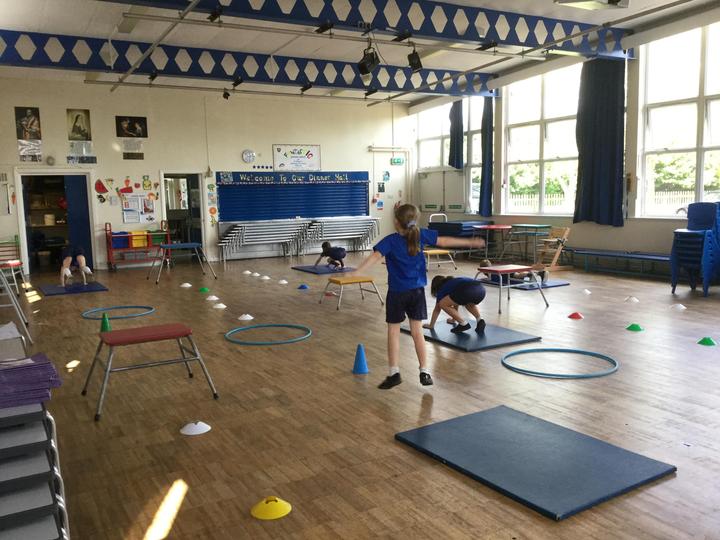 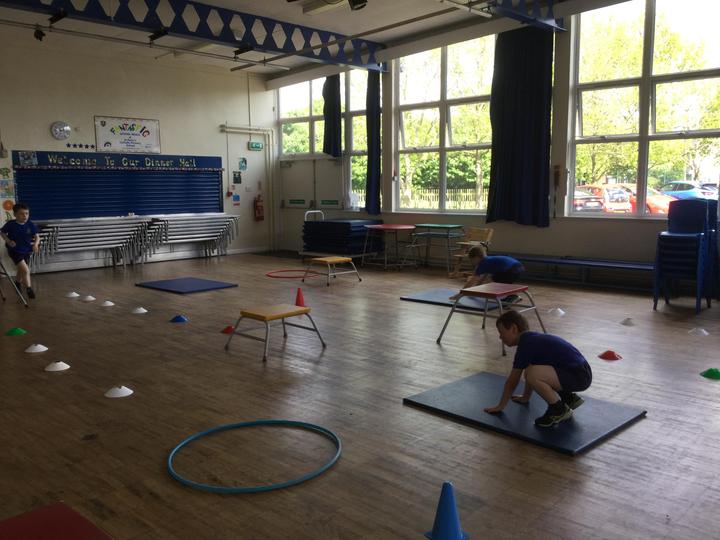 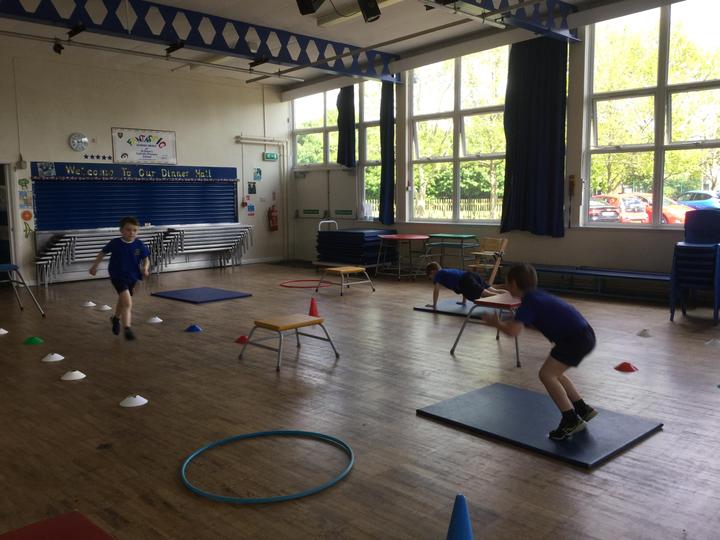 Today, children in Year 2 enjoyed an active maths lesson where they put their addition and subtraction skills into practice! They were split into house teams, given a 2-digit number and one child had to run to collect a second number from their coloured hoop. Meanwhile, the rest of the team had to jump, dance or squat! Once the second number was retrieved, two children had to either add or subtract the two numbers depending on the instruction. 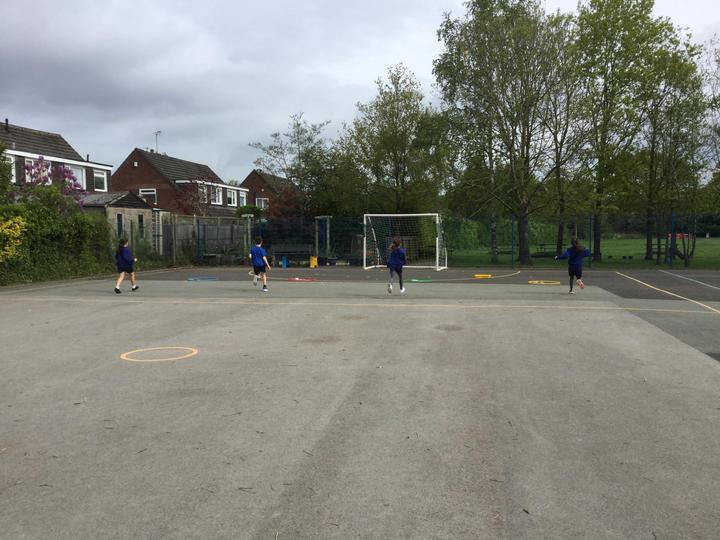 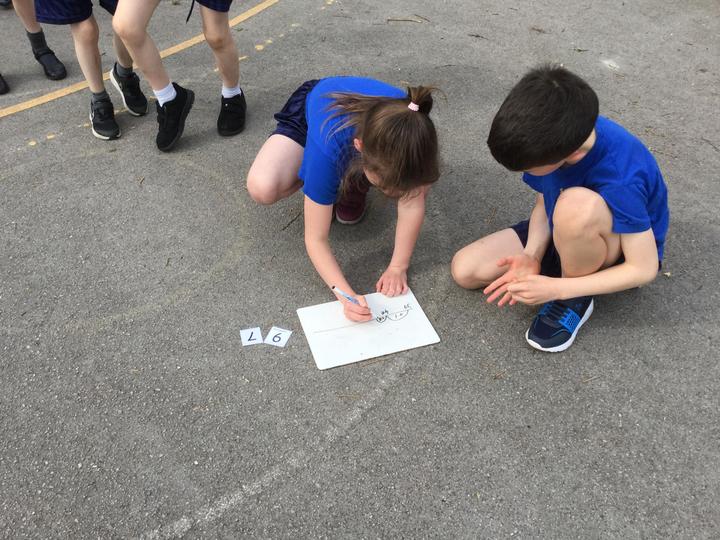 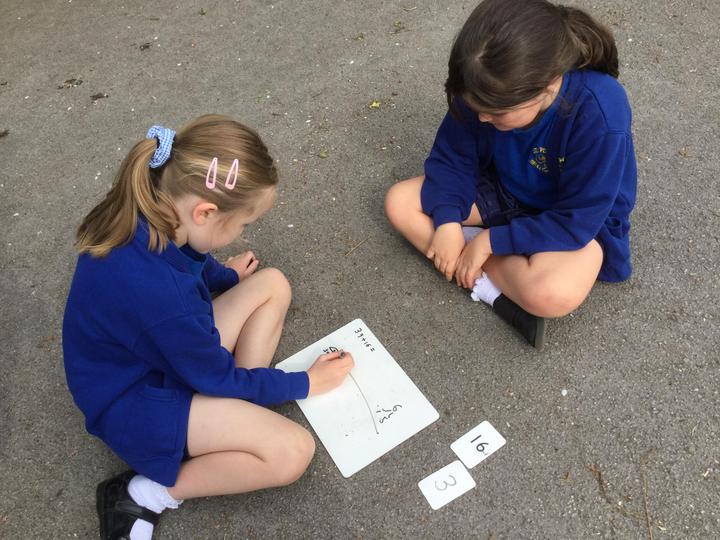 This week, children in Year 2 began their new science topic, ‘Plants’. After mind-mapping what they already know, everyone searched the school grounds for as many different plants as possible.

Welcome back, Year 2! Over the past two days, the children enjoyed a range of lessons including an active maths session where they practised directing their partners using ‘forwards’, ‘backwards’, ‘left’ and ‘right’. As well as this, the children enjoyed a drama lesson linked to English, freeze-framing key parts of the story ‘Lost and Found’ by Oliver Jeffers.

This week, children in Year 2 prepared for Easter. They created beautiful Easter cards and participated in Easter assemblies. In addition to this, they loved expressing themselves on ‘Children Choose Day’! They chose to enjoy a ‘Show and Tell’ session where they brought something in from home to show their classmates.

This week, children in Year 2 began learning about funny poetry. They answered questions about, and learned verses from, ‘An Alien Stole my Underpants’. Then they read ‘Alien’s Dinner’ and compared the two poems, giving their opinion about each.

This week, Year 2 children participated in a science lesson with Mr Reynolds. They were tasked to design and create a paper bridge that was rigid enough to hold the weight of a toy car. The children worked collaboratively and had a fantastic time!

Today, children in Year 2 participated in a ‘Sponsored Sing’ to raise money for our school’s chosen charities. They spent over an hour singing a range of different songs - they had a fantastic time!

‘You’ve Got a Friend in Me’ 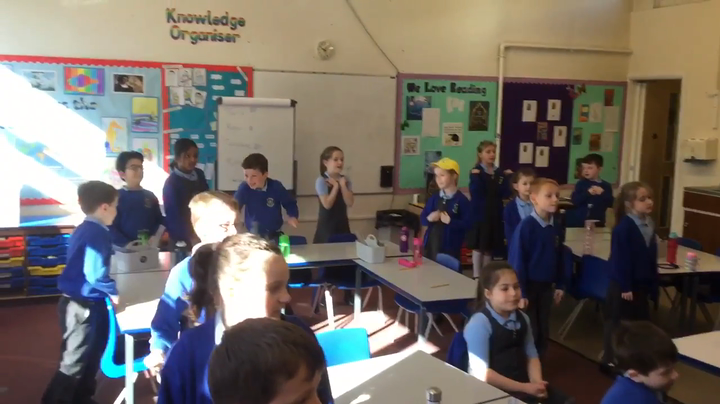 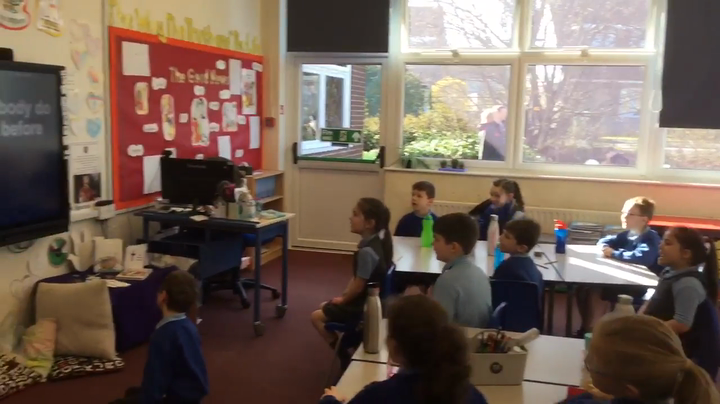 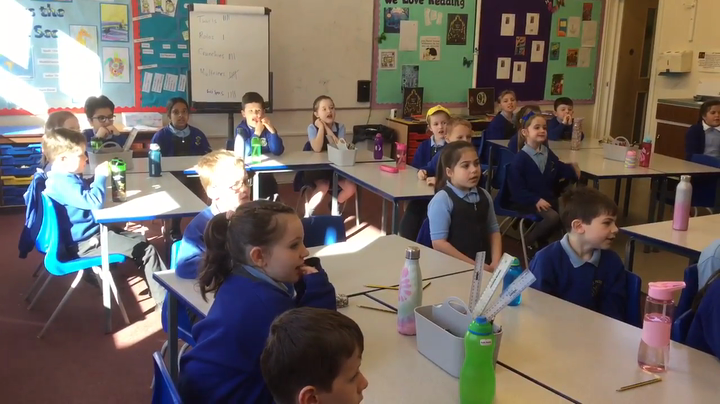 This week, children in Year 2 enjoyed celebrating World Book Week! They began the week by participating in a virtual session with author, Claire Culliford. During this session, they listened to one of Claire’s stories and learned about keeping the environment clean. The children ended the week with an ‘Under the Sea’-themed day where such an amazing effort was made by all! The costumes were fabulous! After practising ‘Under the Sea’ all week, the children performed it for the Year 6 class. 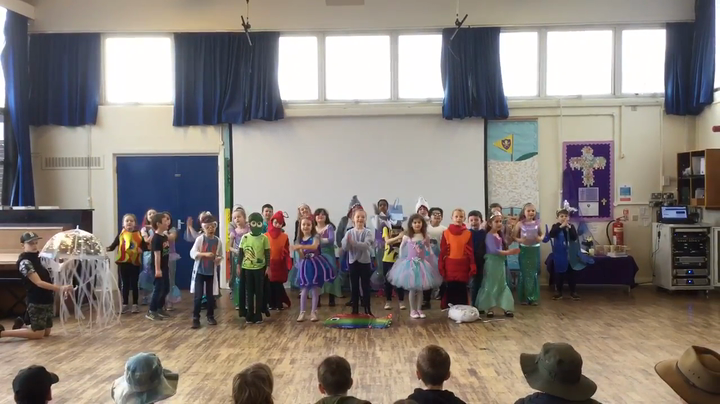 This week, children in Year 2 continued with their ‘We are Photographers’ topic in Computing. After taking a photo of an object or pattern from the classroom, children used PicCollage to edit it. They added a background, some writing and even added stickers.

This week, children in Year 2 learned the difference between fiction and non-fiction texts, sorting them into two groups. After that, they began reading ‘The Big Book of the Blue’, learning all about the creatures living in our oceans. They deepened their knowledge by using the iPads to continue their research.

This week, we have enjoyed acknowledging and celebrating Children’s Mental Health week. The children learned about the five pathways to wellbeing and created freeze-frames to represent each one. They enjoyed being active, including participating in ‘Smile for a Mile’. Year 2 also enjoyed making and eating fruit kebabs in the hall!

This week, children in Year 2 used their knowledge of pitch to order instruments from lowest pitch to highest pitch. They had great fun experimenting and comparing sounds! 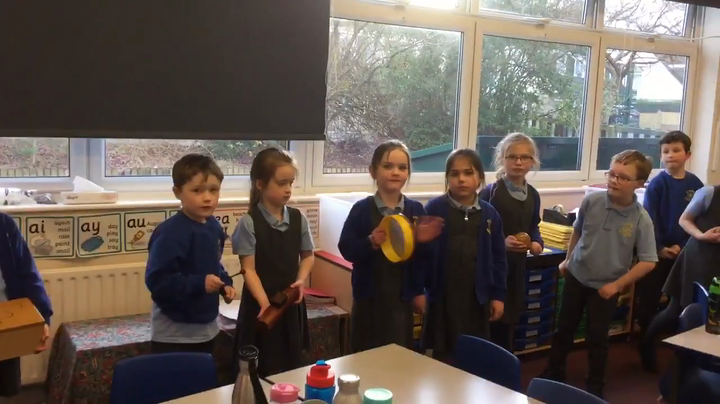 This week, children in Year 2 have been working hard to learn how to tell the time. They enjoyed using clocks to show o’clock, quarter past, half past and quarter to. Some children were even able to tell the time throughout the day, working out how long until break and lunchtime!

This week, the children in Year 2 have learned the story of ‘Jairus and his daughter’. First, they created a storyboard to show their understanding of the story. After that, they role-played as Jairus and his wife.

Jairus and his wife 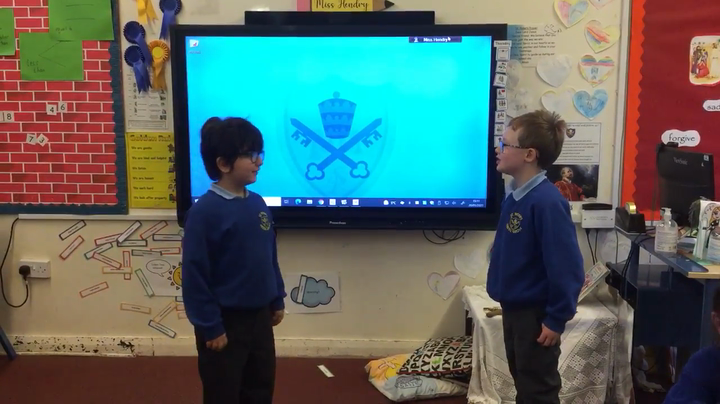 Children in Year 2 have made an excellent start to the new year, enjoying lots of activities and learning! In one PE lesson, children began a gymnastics unit where they explored high, medium and low shapes.

Yesterday and today, children in Year 2 had a wonderful time preparing for Christmas. They loved dancing and playing games on Party Day, as well as completing Christmas art work. They even had a visit from Father Christmas!

This week, children in Year 2 have been busy preparing for Christmas. They have enjoyed making beautiful calendars which they intend to give out as Christmas presents. They also loved painting handmade houses which will be used as Christmas tree decorations.

This week, children in Year 2, along with children in all other year groups, have enjoyed ‘Everybody Writes’ week. They used ‘’Twas the Night Before Christmas’ as inspiration to write their own descriptive story about a child spotting Father Christmas in their house on Christmas Eve night. Before writing, children acted out their idea in small groups.

This week, the children in Year 2 have been busy practising their Christmas Nativity play. Each child decorated a star which will be used as part of our set design. We can’t wait for everyone to see the play!

This week, children in Year 2 have been working so hard to complete a range of maths and English activities. They worked maturely and independently, showing what they have remembered from Year 2 lessons.

This week, the children enjoyed ‘Boogie Bounce’! They danced and jumped along to music and had the best time! 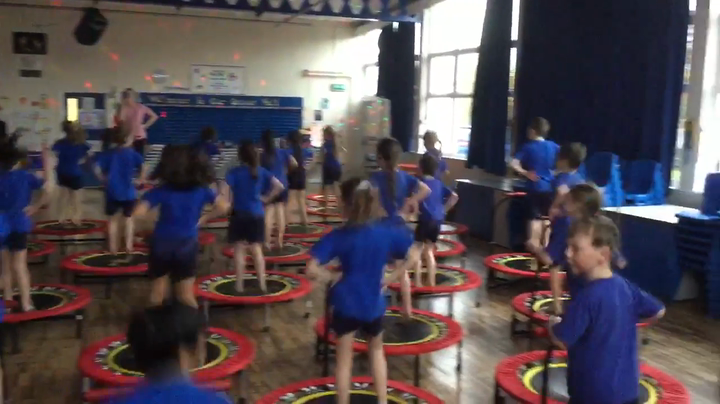 This week, children in Year 2 enjoyed celebrating National Maths Week. They participated in an active maths lesson as well as some practical lessons to help them to enjoy learning about fractions. Everyone had a great time!

This week, children in Year 2 began a ‘Great Fire of London’ dance topic with Mrs O’Hare. They created a dance which incorporated moves that symbolised stirring, kneading and baking bread as well as the spark that grew into the fire. 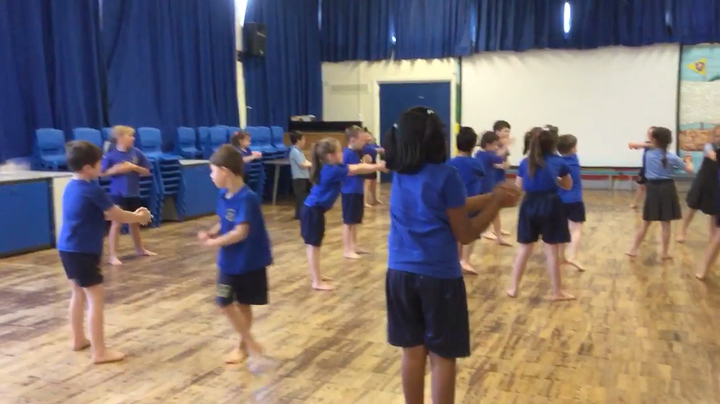 This week, the children learned what electricity is and how they can stay safe around it. In groups, the children prepared a mini assembly and each group performed their assembly to the rest of the class. Everyone learned tips for staying safe e.g. no drinks near electrical items. 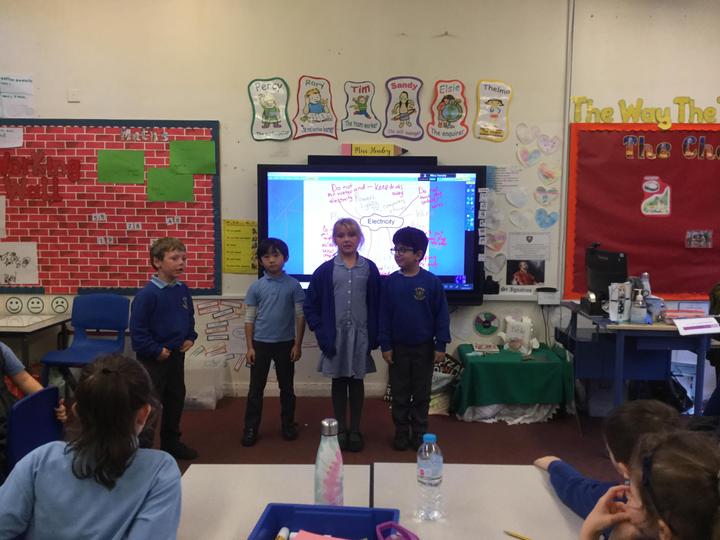 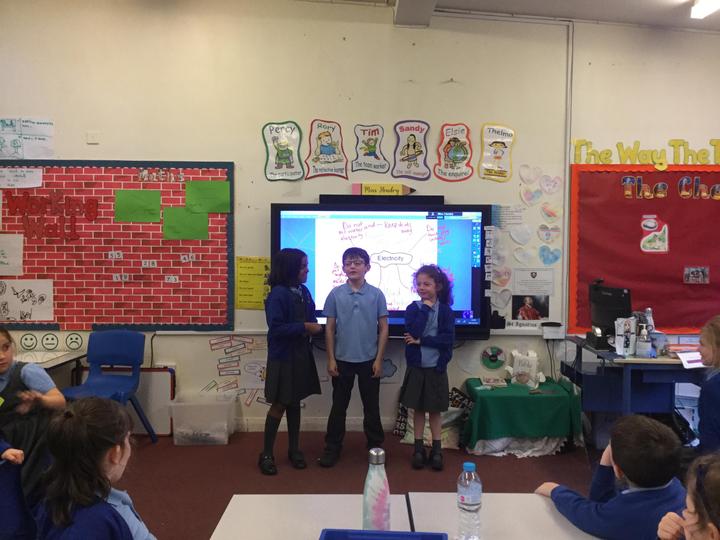 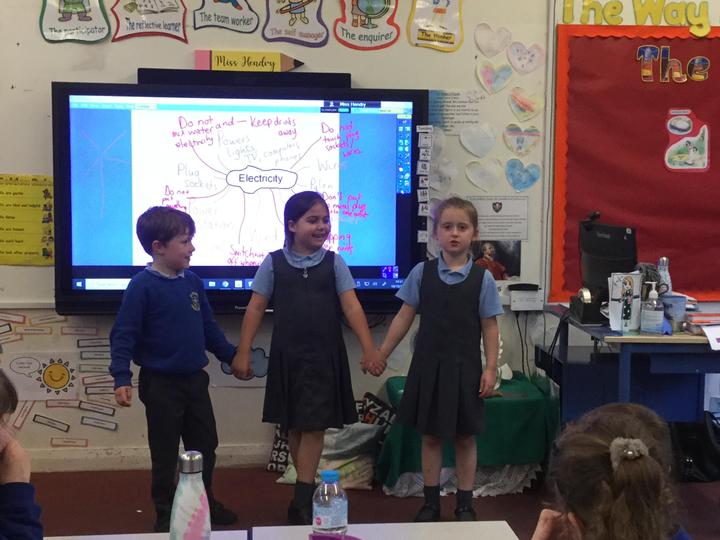 This week, the children planned, wrote, edited and redrafted a letter to Mrs Finan. The results were outstanding. Everyone used their best handwriting, remembered capital letters, full stops and question marks, and some children even organised their writing into paragraphs. Well done, everyone!

This week, children in Year 2 enjoyed using the iPads to research what happened to St. Paul’s Cathedral during the Great Fire of London. Some children also discovered facts about how the cathedral was rebuilt and what it is like today. Using the findings from this research, the children were able to create eye-catching posters.

Earlier this week, the children enjoyed a drama activity within their English lesson. They imagined they were the main character from ‘John Patrick Norman McHennessy, the boy who was always late’, thinking of new excuses for why he was late to school. The children loved pretending they were the teacher who shouted at John!

This week, children in Year 2 created Great Fire of London scenes by drawing the London skyline on black paper then cutting out the silhouette. Then they painted a fiery background ready for the silhouettes to be glued on top. The art work will make an eye-catching display for our classroom!

This week, the children enjoyed outdoor learning as part of their science lesson. They were tasked to find both natural and man-made objects and sort them into two separate piles. Everyone enjoyed being science explorers!