Welcome to the Year 5 Class Page!

This week, the year 5's took part in a food lesson with Mrs. Chadwick from Harrytown, in which they made Brazilian biscuits, coconut & chocolate kisses and Brazilian lemonade. We had great fun and the food was delicious!

The children practised performing a football themed poem in front of an audience, in celebration of the start of the European Championships!

This week, in celebration of Science week, the children carried out an Olympic themed Science investigation to answer the question, 'Do people with the longest legs jump the furthest?'

We played a whole class game of dodgeball. What a game! We had great fun, with fantastic skills and sportsmanship displayed by the children.

Year 5 carried out a Science experiment focusing on how shadows appear to move throughout the day. We plotted our results in a bar chart.

Year 5 have been focusing on tennis in our PE lessons.  The children have been practising their ball skills and control, before they practised rallying with each other.

A group of four year 5 children visited St. Bede's College, Manchester on Wednesday to participate in the 'Mathemagic' Challenge.  They thoroughly enjoyed putting their Maths skills to the test and were the overall winners on the day.  Well done!

This week, the children have researched, planned and written a non-chronological report, focusing on our new topic of Brazil.

We started our new topic on Brazil.  We started by brainstorming facts that we already knew about the country and came up with some questions that we'd like to find the answers to during the topic.

The children reflected on the main days of Holy Week. They created their own images for Palm Sunday, Maundy Thursday and Good Friday. We will add Easter Sunday after half term.

The children have written their own three chapter 'fear' stories, set on a mysterious island. They planned each chapter thoroughly and produced some truly outstanding work!

This week the children enjoyed celebrating World Book Week.  As part of the celebrations, the children dressed up as their favourite Roald Dahl characters. They looked fantastic!

This week was 1960's week to celebrate the schools 50th anniversary.

In year 5, we had a football session to celebrate England's World Cup win in 1966.

It has been a brilliant week! 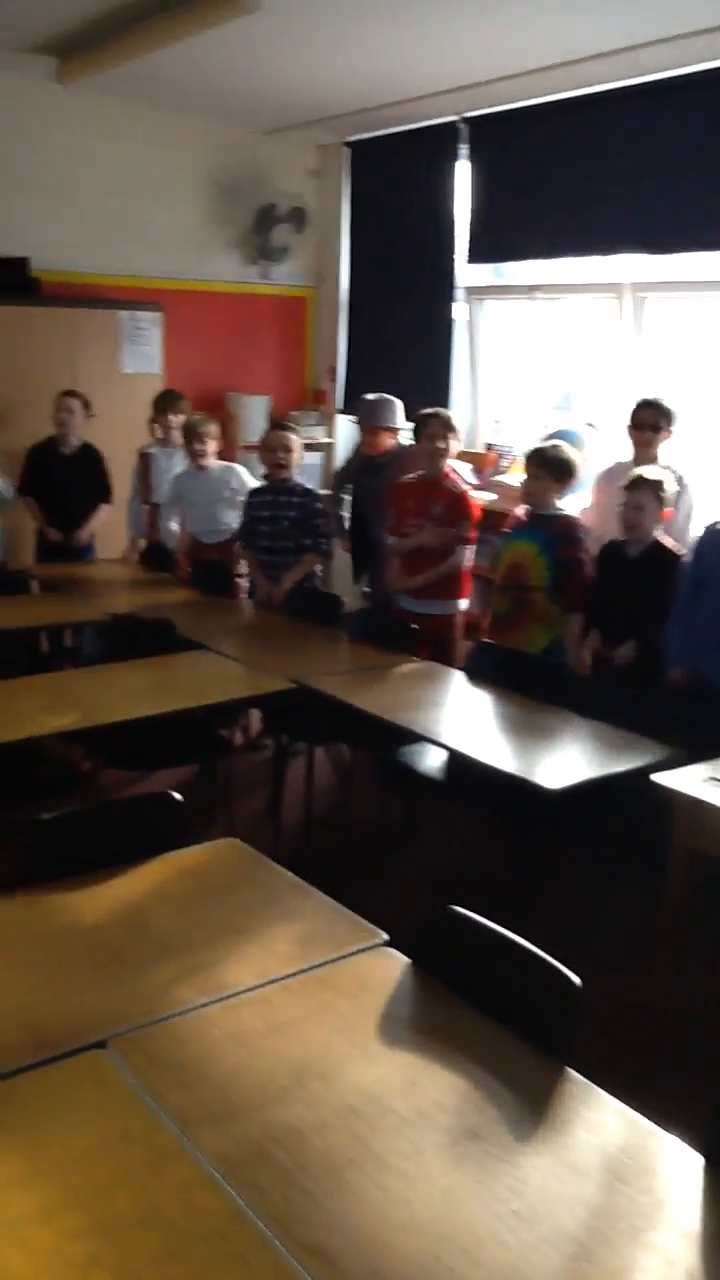 28th January 2016 - Year 5 carried out a science investigation, measuring the level of friction on six different surfaces around school

8th January 2016 - Year 5 have started learning about World War 2 as their new topic.

18th December 2015 - Year 5 have been working hard practising for their Christmas carol concert.

11th December 2015 - Year 5 have been thinking about the thoughts and feelings of Mary after her visit from the Angel Gabriel.

27th November 2015 - This week the year 5's have been creating their own dramas about bullying people based on their religion.

20th November 2015 - The children have been working very hard planning and writing their own UFO diary recounts.

13th November 2015 - The children have been practising the short formal (bus stop) method of division and rounding the remainders based on the context of the question. We focused on reasons why they rounded the remainders up or down.

6th November 2015 - Year 5 have been working hard learning lacrosse skills and using them in a game situation.

23rd October 2015 - As part of our North America topic, in art we have been focusing on 'Walt Disney - an American Dream.' The children have been designing characters for their own brand new Disney movie.

16th October - Year 5 have been learning about Motown music from Detroit.

9th October 2015 - Y5 have been writing "Just So Stories" in the style of Rudyard Kipling.

A 'sessionid' token is required for logging in to the website and we also use a 'crfstoken' token to prevent cross site request forgery.