Welcome to the Year 4 Class Page

Well done to the pupils of Year 4 who became Change4Life Champions!

Year 4 would like to say a big thank you to Mr Garvey who has come in to help with ICT lessons this year. They have had a wonderful time and learnt lots!

This week year 4 have been playing Rounders non stop!

This week we have enjoyed many things including using the iPads for various tasks and making colourful pictures.

This week we had a brilliant time visiting the Museum of Science and Industry in Manchester. We all learnt so much and really enjoyed trying out the interactive displays and experiments. At one point during the day we saw a video showing how graphene is extracted from the earth. We all thoroughly enjoyed the hands on experiment gallery, particularly the section on light.

This morning we had a PSHE assembly and all the classes focused on either fire or water safety. Year 4 spoke about fire safety and did a mini quiz for the rest of the school.

This week Year 4 took part in the Greater Manchester Music Hub singing challenge and had a wonderful time!

This week Year 4 was visited by Dr Connolly as part of healthy lifestyles week. The Year 4 members of the school council also helped to promote healthy snacks during break time on Wednesday.

Year 4 celebrated their Class Mass on Monday. The theme was hands. We were joined by parents, grandparents, Mrs Finan, Miss Miller and  Father Peter. Thank you for celebrating with us.

We enjoy helping people reach their targets and achieve. 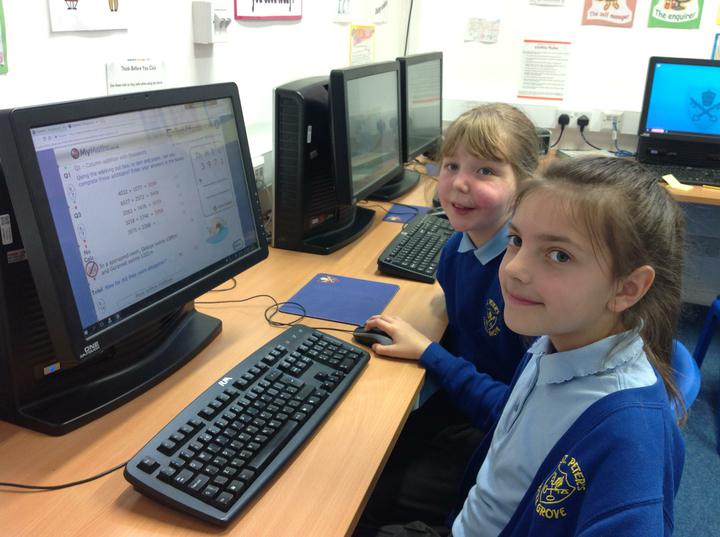 This week Mrs Harrison came in to teach us about the digestion process. Firstly, she stuck an outline of a child onto the stockroom door. Next she handed out laminated, coloured organs to stick onto the outline and she then showed us where the organs are placed inside a body. Afterwards she helped us to fill in a worksheet that had pictures of organs in one column, names in another and in the final column there was a list organ functions. We had to match up the picture to the correct name and job. I really enjoyed the lesson.

You can find more videos of our lesson on the 'Science Week' page in the gallery! 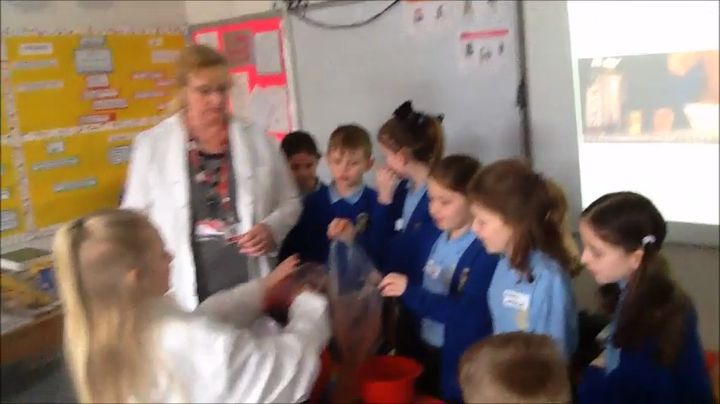 Year 4 have been busy practising the song 'Like a Roman' for the musical assembly on Friday.

On Wednesday, we were very lucky because Simon's mum (Mrs. Harrison) had come to teach us about pH.

Firstly, she gave Simon a drop of lemon juice to taste and passed scented soap around. Next, she told us about lemon juice being acidic and soap being alkali. Beforehand, she had handed out coloured pieces of card ranging from bright red to purple. We were given some test sticks that changed colour when exposed to different liquids. Mrs Harrison told us that the closer to purple the test stick turned, the stronger alkali it was and vice versa.

Next she handed out sample bottles containing different house-hold chemicals. We then tested them and got some surprising results: the cleaning product was neutral!

After we had finished experimenting, we all caught up on the results of the chemicals we didn't test and sat down. Mrs Harrison informed us that if an acid and an alkali mix, they cancel each other out and turn the pH level to 7 which is neutral. Afterwards, all of us played a game where we tried to cancel out acids and alkalis with their opposite after defining them.

We had a wonderful time and I would like it to happen again. Thanks Mrs Harrison!

We are your Change4Life Champions. To be in our CFL Activity Club we are mainly targeting the people in years 2,3 and 4 who don't exercise as much as us.

On Tuesday 7th March 2017, we went to Werneth High School where we were trained to lead a lunchtime club. We will be holding our C4L Activity Club mostly on the playground in Spring. In the Summer we hope to be able to use the field. We also discussed which was the best day to hold the club. We now need to consult Mrs Finan and Mr Reynolds.

On Tuesday, we also played many games and made some new friends. If you join our C4L Activity Club you may make new friends in different year groups.

We really enjoyed our trip to Werneth and look forward to seeing you in our Activity Club.

Everyone enjoys World Book Day as far as I'm concerned. Since it only comes once a year, everybody makes the most of it and the creative nature of the day is displayed by all years. We also have the annual Assembly, where each class comes to the front of the hall to showcase their costumes. The children then explain which character they represent. I think it is an excellent celebration and should be continued in the future. 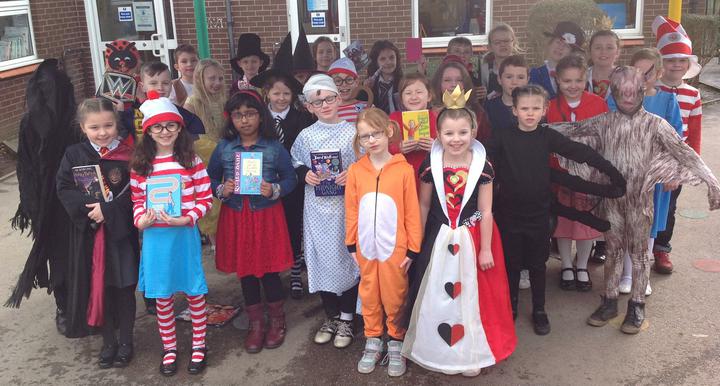 Year 4 had a very enjoyable trip to Hazel Grove Library on Monday. Michelle, the librarian talked to us about fiction and non-fiction books and explained how to use the Dewey syste. She showed us a selection of her own books and read us a really funny book called 'I'm Falling to Bits' by Tedd Arnold. It was really funny!

Year 4 enjoyed spending time with the chicks. How they've changed!

Today, Miss Sellers brought in different types of porridge so we could see how much sugar there was in the different brands.

We completed a tally chat to show which one we would buy. The Flahavan’s Irish Quick Oats and the Dorset Raspberry Porridge were the most popular with a score of nine.

Each type of porridge had a different amount of sugar, some of which were surprisingly high. These were the amounts:

We also used our division facts to find out which was the most economical (best value for money). The Flahavan’s was the best value for money, costing 11 pence for one serving. The most expensive was MOMA as you are paying for convenience because you only need hot water and not a microwave or pan.

We have started learning about the Romans. We used the Internet to find out lots of interesting facts and for homework found ten English words which are derived from Latin.

Year 4  have presented  a variety of short talks about a range of subjects including fossils and  Veganism. Well done to all!

Year 4 visited Shepley House on Monday 12th December. Their singing was beautiful and they were rewarded with a drink and biscuits. Well done!

Year 4 have received swimming certificates this week. No school swimming now until Year 5!

Friday 2nd December - We have been preparing for Advent.

Friday 25th November 2016 - We had great fun on Tuesday when it was the Scooter Festival. The whole of Year 4 enjoyed the experience. Thank you Mr. Reynolds for organising it.

Friday 18th November 2016 - Year 4 have enjoyed being Super Scientists with Mrs. Somerset. Unfortunately the classroom did not smell very pleasant! Please ask your child about this work.

Friday 11th November 2016 - This week during our R.E. lessons we have been learning about Judaism. We now understand the importance of rules, especially  the Ten Commandments.

Friday 4th November - During the half term holiday we drew pictures and made models of dragons in preparation for our English work based on the book 'How to Train Your Dragon' by Cressida Cowell.

​Friday 21st October- This week when we went swimming, we learned about keeping safe in the water. We designed posters showing what we had learned.

This week we have produced our own prayer card containing two quotes from the Bible that are special to us.

This week we have been celebrating Harvest and have worked hard to produce some colourful designs. Some of us chose to work with a partner and had great fun!

This week we have used ICT to support other areas of the curriculum.

This week we have enjoyed learning about the amazing human body.

We have completed some excellent homework about inspirational Olympians and Paralympians.

This week we worked together as a team  and wrote a class prayer about Grandparents.