Lots of activity in Year 4 this week. The children are developing their dance sequences based on the story of Theseus and the Minotaur. They have also walked or ran 196 miles between them this week! Only 5604 miles to go on the run to Tokyo!

Another busy week in Year 4 finished with some excellent body percussion during Music with Mr Smith. The video below is just a small sample of their learning today. 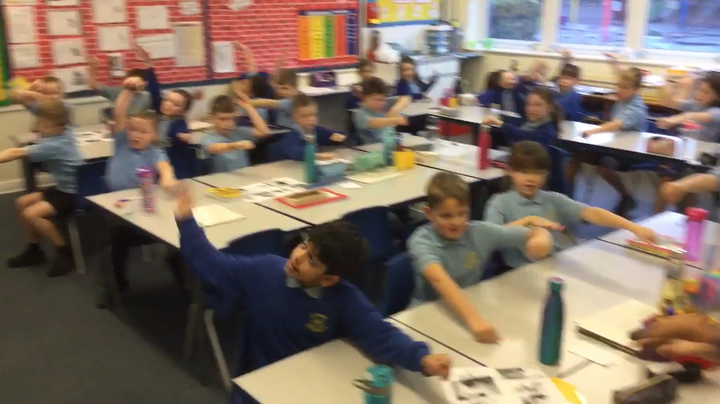 We have had a fantastic first week in Year 4. The children have shown a brilliant attitude and produced some excellent work. The work included a science investigation about ice.

A super end to term, with Christmas party day and the Carol Service. The children even had time to build an aqueduct out of recycled materials.

The children have finished their Roman oil lamps this week by painting them. They used a terracotta colour to give the lamps an authentic look.

Despite the low numbers at times this week, Year 4 have been working hard in all areas. They even managed to perform a wonderful version of 'No room at the inn' for the music and coffee afternoon today! Have a very restful weekend!

A busy but exciting week in year 4 thIs week. The children had a superb trip to Chester for the DEWA Roman experience, where they went on soldier patrol and learned a huge amount from the experts at the museum. We also spent Thursday thinking about our school mission. The children produced some excellent work about the line - we celebrate when others do well.

In preparation for their trip to Chester next week, Year 4 have been exploring various Roman sites and artefacts using Google Expeditions. The children were amazed when they explored the Colosseum, as it appeared to be resting on a table in the classroom!

We also took the time to relax and read some of our new non-fiction books which were added to our class collection this week.

The children had a fantastic time in Music with Mr Smith, making and then playing their own bugle.

Some super work in Year 4 this week, including this coding in Scratch. The children have been working hard over the last few weeks to create these algorithms. When running, these algorithms enable the children to practice their times tables.

The children were presented with a problem this week, they had to complete this circuit to light the bulb.

The children have been learning about the jobs held by some of the Celts during the period before the Roman invasion.

This week we marked World Mental Health Day by taking part in a live online lesson from the BBC. We also had a very exciting visit from Mr Holt, who helped the children to design and make a Roman oil lamp. Check out the photos below.

Year 4 have been learning about harvest this week and produced these excellent Pic Collages.

Some super art work in Year 4 this week. Following our work on instructions and explanations, the children followed a set of instructions to create a night time reflection using water colours and oil pastels. A few examples can be found below.

This week the children drafted their own version of a fable. They will be writing them up in the coming weeks to make a class book of fables. Here is one example of the children's work.

A superb first full week in Year 4 for all the children. Lots of learning, hard work and success. the pictures below are just a few from our Science lesson where the children were investigating simple circuits.